As I boarded a plane in Des Moines, Iowa in route to Detroit for my fourth and final visit to the University of Michigan, I couldn’t hide the bounce in my step. I was on my way for the conclusion of the confidential interview for the position of Vice President for Student Life. While on this familiar plane ride to Detroit Metropolitan Airport, I enthusiastically reflected on the post-interview next steps as outlined on a phone call a few weeks prior with President Mark Schlissel. After the final set of interviews, which would conclude with dinner with that same president who insisted I call him “Mark,” he would complete the necessary reference calls and extend an offer which I fully expected to accept. I was envisioning the planned return to Ann Arbor in late March to be present for the Board of Regents meeting where I would be introduced. During that visit, I would get to meet staff in the Division of Student Life. I was particularly excited to meet them because of the confidentiality of the search; until then I had only been able to meet a small number of key leaders in the Student Life Division that I would eventually lead. I dreamed of shaking hands, touring departments, and starting to establish relationships that would be critical to my success. I headed back to the Detroit airport in late February optimistic about being able to openly see the campus in full form. It was the first Friday of spring break, and the other visits included two airport interviews, and one other set of interviews at the President’s house.

In just a few short weeks it all changed. COVID-19 emerged in the United States with vengeance ravaging college campuses and communities across the nation. Suddenly that Board of Regents meeting became a virtual meeting where I listened online while I simultaneously announced to 29 members of the Iowa State Student Affairs Cabinet that I was leaving them for the University of Michigan. I could not tell them in person. I could not look into their eyes to tell them how sad I was to leave. I couldn’t even shake their hands. All I could do was stare at them through a computer screen. As I struggled to make the announcement with tears in my eyes, it felt cold, impersonal—like I was literally talking to the Brady Bunch. And eventually, with a click of a button on a screen that read, “Leave Meeting,” that was it.

I spent my remaining two months at Iowa State. As my June 5th, 2020 final day approached, I focused my time providing leadership as a member of executive administration charged with making key decisions necessary to lead Iowa State through this unprecedented shutdown. My mind was totally focused on the task at hand, while everyone hoped that maybe in a few months this nightmare would be over. In addition to endless virtual meetings with various COVID-19 leadership groups, I also had to focus on continuing the dual role as Interim Dean of Students, which began in mid-February. With my pending departure, there was a heightened urgency to successfully complete the search for the next Associate Vice President and Dean of Students. The debate about whether or not we could complete a search virtually without candidates coming to campus was over once people realized I would be gone and the Division would be without a Senior Vice President and AVP Dean of Students.

As I prepared Iowa State for this transition, all the while searching for an AVP Dean of Students, and now also providing President Wintersteen with critical feedback regarding the search for my successor, I could not help feeling horrible leaving Iowa State during a pandemic with so much uncertainty. After the announcement was made that Ms. Erin Baldwin would serve as the Interim Senior Vice President, I also had to turn my attention to preparing her. All of this while being incredibly excited about my next adventure at the University of Michigan.

Fortunately, I was able to carve out time to hold virtual meetings with the University of Michigan Student Life Senior Leadership Team, all of their direct reports, as well as a few of my key direct reports. Although those first important meetings were not what I imagined prior to the pandemic, they were engaging, fun, and helpful. The meetings gave staff an opportunity to meet me, most for the first time, and they gave me a chance to meet them and learn about their departments and their Wolverine experience. I asked each person to tell me what they would do if we could make the pandemic disappear for one week. The responses gave me a glimpse into their personalities, and it was a way to get people to smile while mentioning the pandemic. It was a chance—in just one response—to escape the feeling of being locked up behind a computer screen. A chance to dream for a few minutes.

It was a time that should have been filled with the sadness of closing a great Iowa State adventure, as well as the excitement of becoming the leader of the Division of Student Life at the number one public institution in the country. In addition to those feelings, it was also a time filled with anxiety and uncertainty. I asked myself, “How will I get to know the people at my new institution?” “How will I make key connections, form important relationships?” “How will I learn this new, complex environment when I get there, especially if I am still in this virtual state?” I wondered how long this nightmare would last. Furthermore, I wondered how I could leave Iowa State this way, a place where I lived, worked, and enjoyed for nearly seven years in Ames, Iowa. I just could not believe it would end this way. I started to realize there would be no reception where I could say goodbye and thank all the countless students, staff, and faculty who supported me. I started to envision waving goodbye while staring at a computer screen. A final “Leave Meeting” button. This was not how it was supposed to end. I couldn’t go out like this! I was inundated with so many mixed emotions, but mostly uncertainty.

My Iowa State Cyclone Family had a real surprise for me. A special ending that I would not forget. On my final day as I came to the office to complete the obligatory key, computer, and purchasing card turn-in, my Executive Secretary, Ms. Rose Wilbanks, and Front Desk Support Assistant Ms. Jean Foley asked me to come outside in front of the building to take a few pictures. As I went outside the tears we were all holding back turned to smiles. I looked down Morrill Road, the road that runs in front of Beardshear Hall, and saw a parade of cars led by ISU Police Chief Dr. Michael Newton, with sirens blaring and lights flashing. Behind him was President Wendy Wintersteen and cars as far as eyes could see. It was amazing to see cars filled with staff from various departments across campus, current students, recent graduates, and faculty. Cars were decorated with signs, balloons, and some tossed gifts and cards out of the car windows, which Rose carefully picked up and put in a “safe basket.” Some parade participants included spouses, pets, and kids who probably didn’t know me but were so excited to get out of the house and participate in a parade. It was a beautiful and wonderful ending considering the bizarre times we were in. It was a moment that left me in tears and with an indelible mark on my memories. I will never forget the end of my Iowa State adventure. 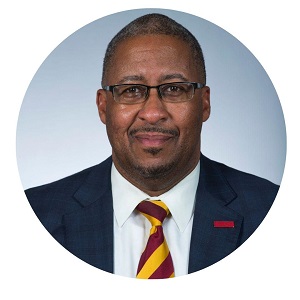 The University of Michigan Board of Regents appointed Martino Harmon as vice president for student life on March 26, 2020. A longtime advocate for student success, Dr. Harmon previously served as the senior vice president for student affairs at Iowa State University, where he provided strategic oversight for the student affairs division with a budget of more than $300 million, 800 staff members and 36 departments. Prior to joining Iowa State University, Dr. Harmon was the executive director of student success and retention at Cincinnati State Community College, dean of student development at Rhodes State College and dean of admission, retention and student life at Washtenaw Community College. Dr. Harmon began his career in student life at the University of Toledo, serving in increasingly responsible roles over a span of 11 years, including interim assistant dean of students, director of the African-American student enrichment office, director of freshman admission, associate director of admissions and multicultural recruitment, and coordinator of campus visits and admission counselor. Dr. Harmon earned a Bachelor of Arts degree in marketing management, a Master of Education degree in human resource development and educational technology, and a Ph.D. in higher education and administration, all from the University of Toledo.