Reporting to the executive director of residence education and housing services, the associate director for apartment and central services is a leader within the Department of Residence Education and Housing Services (REHS) in the Division of Residential and Hospitality Services (RHS) at Michigan State University (MSU). The position provides strategic leadership and identity-conscious supervision to a unit consisting of 35 facilities staff, including five direct reports. The associate director will work closely within their unit, across three apartment communities, and with the central services team to develop a long-range plan to fully serve and accommodate all residents through a lens of diversity, equity, and inclusion. The associate director will further work with external partners on capital projects and management systems, and is expected to govern resources effectively. The associate director will plan, direct, and implement projects, department milestones, and goals while adhering to approved budgets. This position manages and oversees a total operational budget of nearly $10 million.

This associate director position was formerly one position that served both the apartments and the residence halls. Tom Welburn served in the associate director capacity prior to his retirement in 2020. The former position has since been split into two positions with one focused on management of the apartments and the other being focused on the residence halls.

Residence Education and Housing Services is a complex entity with wide-ranging stakeholders and responsibilities. It is imperative that the associate director fully comprehend and embrace a collaborative operation that relies heavily on shared relationships with stakeholders.

While this position is responsible for housing operations, relationship building and leadership skills are the top priorities for the hiring manager. It is important for candidates to have strong supervision and staff development skills in order to be successful in this role. With the re-configuration of this position, it will be important for the new associate director for apartment and central services to have frequent communication with others on the REHS leadership team.

Within this context, there are several aspects of the role of associate director in which successful candidates will need to be prepared to lead after a period of acclimatization and relationship building.

Residence Education and Housing Services is a complex entity with wide-ranging stakeholders and responsibilities. It is imperative that the associate director fully comprehend and embrace a collaborative operation that relies heavily on shared relationships with stakeholders.

While this position is responsible for housing operations, relationship building and leadership skills are the top priorities for the hiring manager. It is important for candidates to have strong supervision and staff development skills in order to be successful in this role. With the re-configuration of this position, it will be important for the new associate director for apartment and central services to have frequent communication with others on the REHS leadership team.

Within this context, there are several aspects of the role of associate director in which successful candidates will need to be prepared to lead after a period of acclimatization and relationship building. 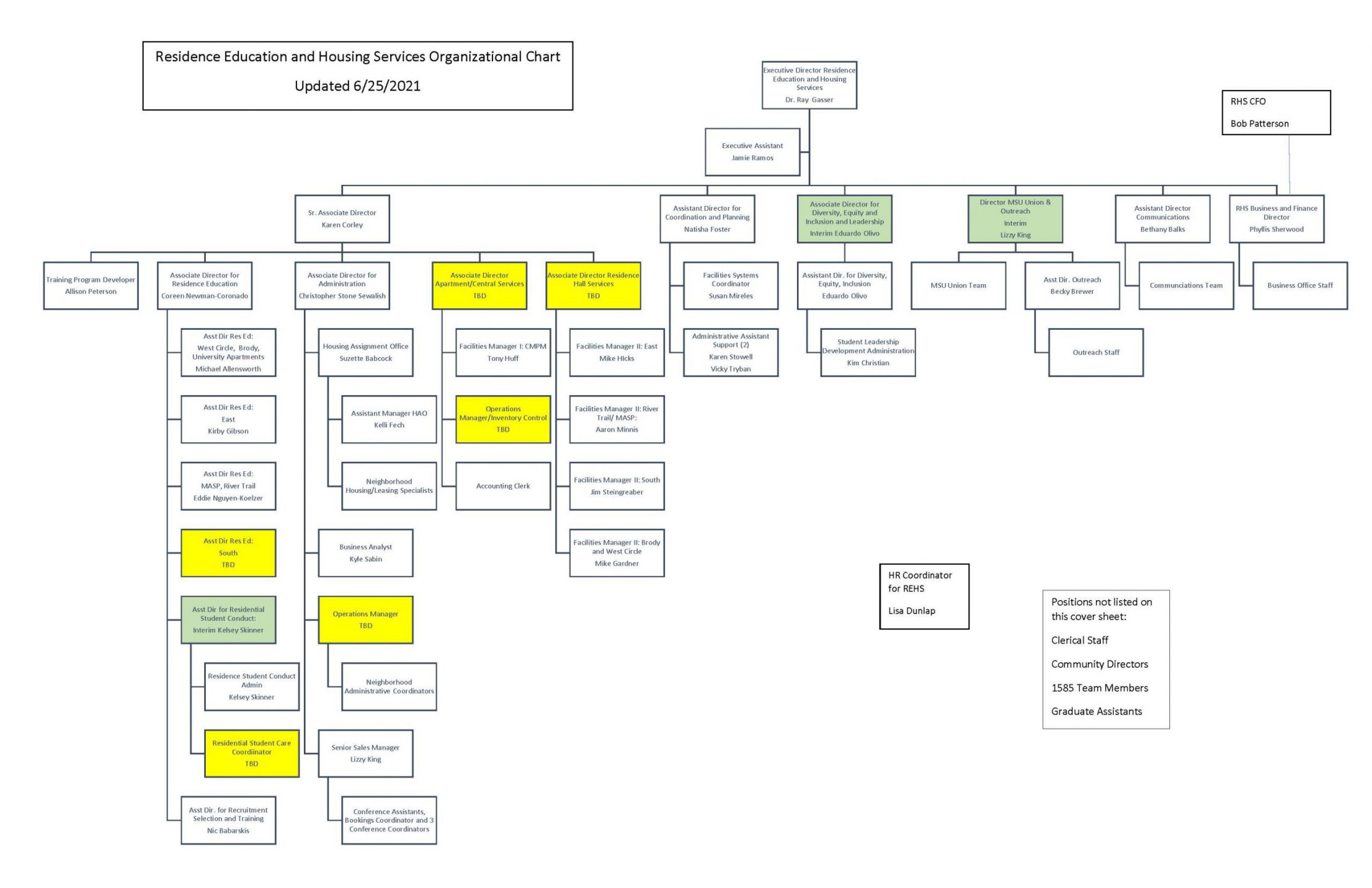 Michigan State University is a public research university in East Lansing, Michigan. MSU was founded in 1855 and became the nation’s first land-grant institution under the Morrill Act of 1862, serving as a model for future land-grant universities. The university was founded as the Agricultural College of the State of Michigan, one of the country’s first institutions of higher education to teach scientific agriculture. As a university of, for, and by the people, Michigan State University began a long tradition of empowering people through educational opportunity. After the introduction of the Morrill Act, the college became co-educational and expanded its curriculum beyond agriculture. Today, MSU is the eighth-largest university in the United States (in terms of enrollment) and has more than 500,000 living alumni worldwide. Home to nationally ranked and recognized academic, residential college, and service-learning programs, MSU is a diverse community of dedicated students and scholars, athletes and artists, as well as scientists and leaders.

The Michigan State Spartans sports teams compete in the Big Ten Conference of NCAA Division I. Spartan football won the Rose Bowl tournament in 1954, 1956, 1988 and 2014, and the team has won six national championships. Spartan men’s basketball won the NCAA National Championship in 1979 and 2000 and has enjoyed a streak of 22 straight NCAA appearances, including 10 Final Fours. Spartan ice hockey won NCAA national titles in 1966, 1986, and 2007. The women’s cross country team was named Big Ten champions in 2019.

Vennie Gore is the senior vice president for auxiliary enterprises at Michigan State University. He oversees all operations within the division of RHS and contributes to the oversight of MSU’s University Licensing Program, as well as the Land Management Office. Among other notable accomplishments, Vennie earned the 2016 Elizabeth A. Greenleaf Alumni Award from Indiana University and recently completed Harvard’s Institute for Educational Management.

Samuel L. Stanley Jr., M.D., was selected by the Michigan State University Board of Trustees as MSU’s 21st president, effective Aug. 1, 2019. Since his arrival at MSU, Dr. Stanley has moved decisively to ensure the University is a safe, respectful, and welcoming place for all. Student success and well-being and continuing to grow MSU’s extraordinary regional and global impact are his top priorities.

His infectious disease research background has informed MSU’s response to the COVID-19 pandemic as he leads the University’s work to safely advance its mission of education, research, and outreach.

Stanley launched a comprehensive strategic planning process for the University, created a diversity, equity, and inclusion planning committee, and appointed two relationship violence and sexual misconduct expert advisers. He has overseen several changes in the institution’s administration, organization, and programs to improve services, operations, and accountability.

Continuing to expand the university’s research enterprise is another priority. MSU’s research portfolio totaled $725 million in 2019 expenditures. MSU’s $730 million Facility for Rare Isotope Beams is planned to begin scientific user operations ahead of schedule and on budget in 2022. Operating at the frontiers of nuclear science, it will yield insights into the nature of the universe, as well as practical discoveries to enhance everyday life. FRIB reached a milestone in 2020 when the United States Department of Energy (DOE) designated it a DOE Office of Science user facility.

A researcher, patent holder, and former technology transfer executive, Stanley supports academic and industry collaborations to leverage both their economic impact and the potentially enormous contributions they can make to society.

Stanley also reorganized oversight of the University’s three medical colleges and its clinical services into a health sciences entity. And, in January 2021, MSU signed a 30-year agreement with the Henry Ford Health System in Detroit to foster groundbreaking research, best-in-class cancer care and health care professional diversity while improving access in traditionally underserved communities. In another collaborative relationship, MSU and Apple Inc. agreed to partner on a Developer Academy in Detroit, the company’s first such skills development facility in the United States.

Active in higher education organizations, Stanley sits on the boards of the Association of Public and Land-grant Universities, the University Innovation Alliance, and the Michigan Association of State Universities. He is an engaged member of Michigan’s University Research Corridor, Business Leaders for Michigan, and the Association of American Universities (AAU), having served previously on the AAU board. Stanley holds appointments to the Michigan Employment Relations Commission’s Health Care Advisory Committee and the McKinsey & Company Taskforce on Higher Education and Opportunity. He also is a past member of the NCAA Board of Directors and NCAA Board of Governors.

Born in Seattle, Stanley earned a Bachelor of Arts in biological sciences (Phi Beta Kappa) from the University of Chicago. After earning his medical degree from Harvard Medical School, he completed resident-physician training at Massachusetts General Hospital and then went to Washington University in St. Louis for a School of Medicine fellowship in infectious diseases. There, he became a professor in the departments of medicine and molecular microbiology, recognizing the collaborative nature of his research.

A distinguished biomedical researcher, Stanley was one of the nation’s top recipients of support from the National Institutes of Health (NIH) for his research focusing on enhanced defense against emerging infectious diseases. He is an expert in the biological mechanisms that cells employ when responding to infectious agents.

Stanley has served as chair of the National Science Advisory Board for Biosecurity, which advises the U.S. government on issues related to the communication, dissemination, and performance of sensitive biological research. He was a member of the National Advisory Allergy and Infectious Diseases Council at the NIH and a member of the NIH director’s Blue Ribbon Panel on the National Emerging Infectious Diseases Laboratories. He also served as an ambassador for the Paul G. Rogers Society for Global Health Research and has received an honorary doctorate in science from Konkuk University in South Korea.

Prior to becoming MSU’s president, Stanley served as president of Stony Brook University on Long Island in New York. At Stony Brook, he focused on improving campus diversity and student success and elevated the University’s research profile by supporting a new institute for artificial intelligence. He chaired the board of Brookhaven Science Associates, which manages Brookhaven National Laboratory on behalf of the U.S. Department of Energy.

For a detailed look at MSU benefits for Executive Managers, visit: https://hr.msu.edu/benefits/index.html