With more than 30,000 students, the University of Massachusetts Amherst (UMass Amherst) is the largest public University in New England, a land grant institution, and the flagship of the Massachusetts public higher education system, ranked among the top 30 public universities in the nation and offering a full range of undergraduate, graduate, and professional degrees. The University sits on nearly 1,450-acres in the scenic Pioneer Valley of Western Massachusetts and offers a rich cultural environment in a bucolic setting close to major urban centers. In addition, the University is part of the Five Colleges (including Amherst College, Hampshire College, Mount Holyoke College, and Smith College), which adds to the intellectual energy of the region.

The director of disability services serves as an important advocate in promoting student success. In this capacity, the director has overall responsibility for determining and ensuring campus support services and accommodations required by students with documented disabilities that qualify under federal guidelines. Focus areas of this position include providing advocacy, inclusion, and support for students with disabilities; expertise in the application of and adherence to related compliance requirements and relevant law; assessing impacts of provided services on student learning and overall student success; providing faculty and staff training and educational outreach programs promoting effective best practices for access and inclusion for students with disabilities; and data-informed strategic planning. Undergraduate and graduate students comprise the great majority of clients this department serves; however, the department also supports the coordination of authorized accommodations for university employees in conjunction with the Accessible Workplace unit of Human Resources. The director provides guidance and expertise to campus leadership around disability-related issues, oversees comprehensive accommodation support for about 3,000 students annually, manages a dynamic professional team of 17 professional staff, and oversees a budget of almost $1.3 million.

Reporting to the assistant vice chancellor for advocacy, inclusion, and support programs in Student Affairs and Campus Life (SACL), the director will do the following.

The new director will encounter the opportunities and challenges listed below.

The successful candidate will possess a master’s degree in special education, educational psychology, higher education administration, or a related field, along with progressively responsible leadership within a college or university disability services office. Candidates possessing a terminal degree, seven or more years with demonstrated progressive responsibility for serving college students with documented disabilities on a residential campus are highly preferred. Highly developed knowledge of legal frameworks pertaining to accommodations for students with disabilities through prevailing laws and regulations; demonstrated ability to determine reasonable accommodations across the disabilities spectrum; comprehensive knowledge of assessment, accommodation, and intervention techniques involved in working with students with disabilities; and superior oral and written communication skills, coupled with high ability to work effectively with diverse clients, staff and faculty will also be required.

In addition to the above-stated qualifications and characteristics, UMass Amherst stakeholders identified the following characteristics as important for the position (in no particular order).

Disability Services is committed to full access for all persons at the University of Massachusetts Amherst and embraces the philosophy of social justice. The office promotes the empowerment of people with disabilities and their full integration into campus life and the community. Direct services are provided for all types of disability. Disability Services also provides information and referrals on issues of accessibility, coordinates guest accommodations, and provides training and staff development to the university community.

Disability Services is charged with providing equal access. Institutions of higher education must ensure that individuals with disabilities are able to independently acquire the same information, engage in the same interactions, and enjoy the same benefits and services within the same time-frames as their non-disabled peers and with substantially equivalent ease of use. 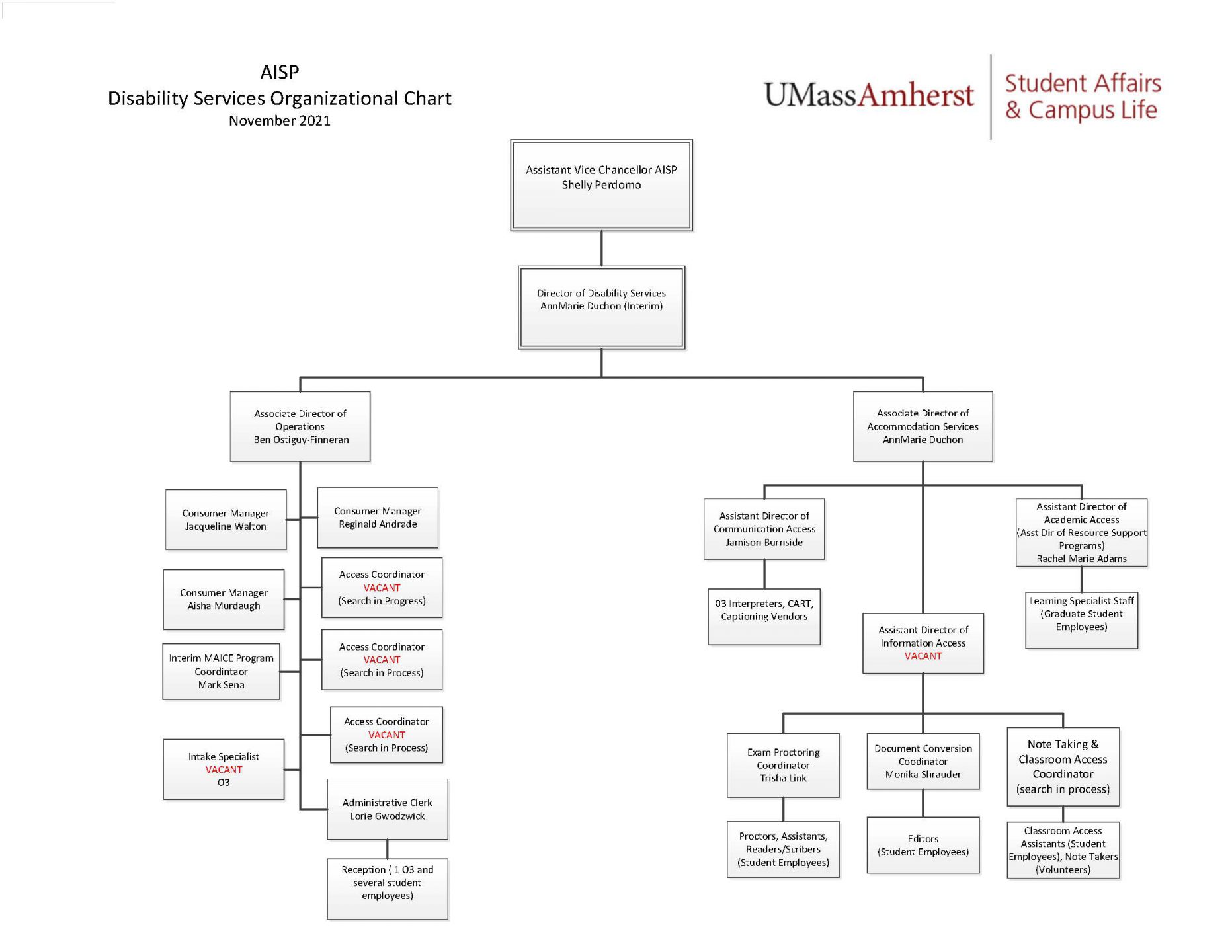 Overview of the Division of Student Life

Student Affairs and Campus Life is a nationally recognized team of student affairs educators dedicated to excellence, innovation, and social justice. In partnership with campus colleagues, we contribute to students’ successful educational experience, support an actively engaged and diverse student body, and challenge them to become leaders in their community and the world.

Student Affairs and Campus Life advance the University’s mission by facilitating student learning and development for maximizing academic and personal success. We create a positive, inclusive, and challenging learning environment that encourages self-motivation and fosters leadership development and life skills. Through engagement with our essential services and programs that promote intellectual, physical, and emotional well-being, our students transform their potential to match their highest aspirations.

We value a student-centered community where 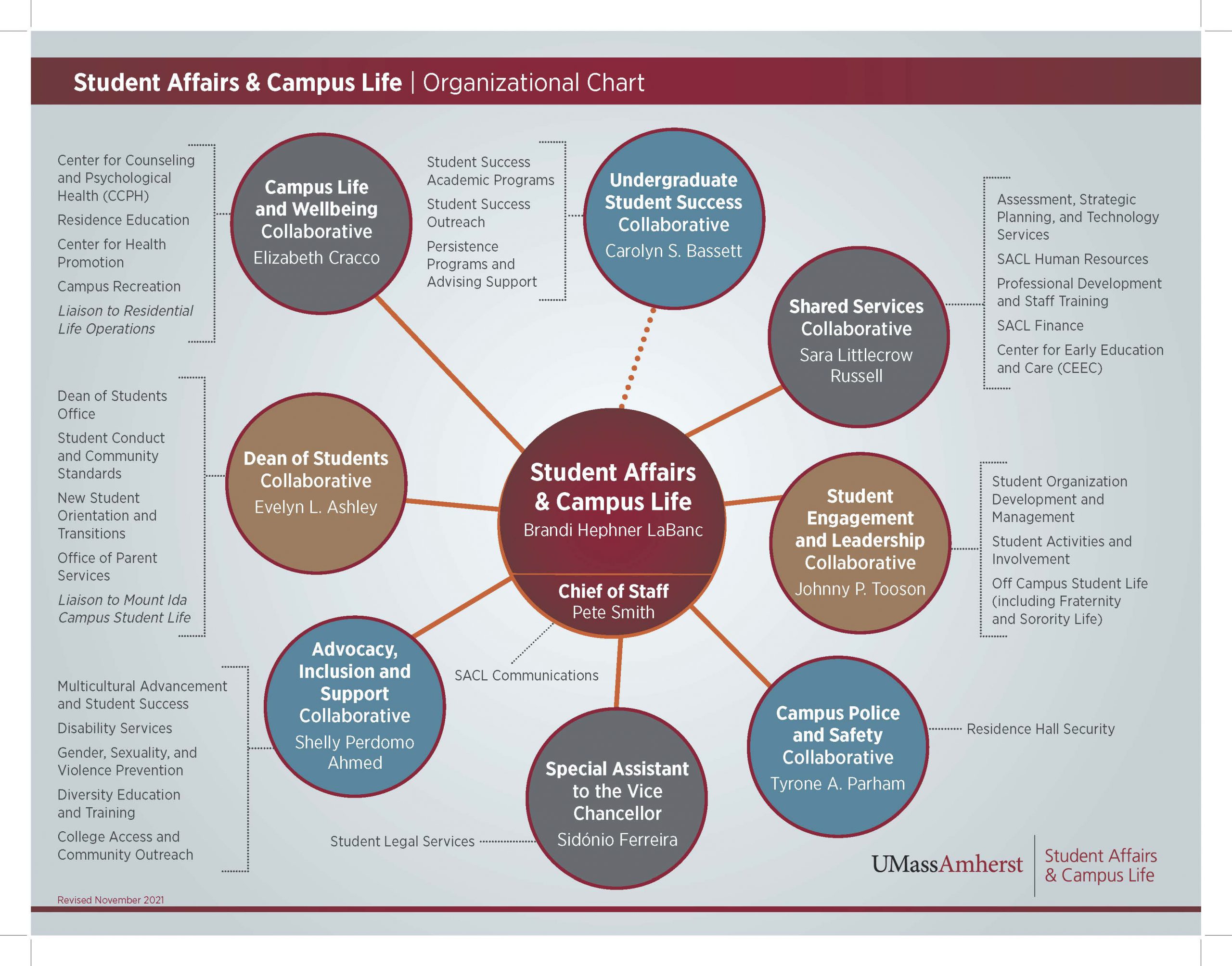 The Advocacy Inclusion and Support Programs Collaborative of Student Affairs and Campus Life is comprised of 11 offices and centers that share the common goals of cultivating community, creating a  sense of belonging, fostering inclusion, and addressing the unique ways in which students’ identities inform their experience at UMASS Amherst. The AISP Collaborative provides a range of services (referrals, resources, support, and advocacy), educational awareness programs, and student development opportunities to affirm identities, build community and cultivate leadership. 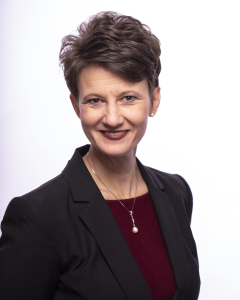 Leadership of the Division of Student Affairs and Campus Life 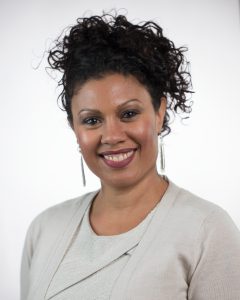 Dr. Shelly A. Perdomo serves as assistant vice chancellor for the advocacy, inclusion, and support cluster for the Division of Student Affairs and Campus Life at the University of Massachusetts Amherst. For 19 years, Dr. Perdomo-Ahmed has provided leadership to diversify and enrich students’ university curriculum and co-curricular programming. She has led strategic planning efforts and has effectively translated plans into operational priorities. As an authentic, compassionate leader and educator, Dr. Perdomo-Ahmed has been a catalyst in establishing sustainable collaborative partnerships across the University to support the needs and interests of underrepresented cultural and identity groups.

Perdomo-Ahmed received her Doctorate and Masters degrees in Educational Policy, Research and Administration from the University of Massachusetts Amherst and her Bachelors in Latin American Studies and Cultural Anthropology from Mount Holyoke College.

Other recent accolades include:

UMass Amherst faculty and staff are top performers in terms of the number of awards and recognitions they receive. UMass Amherst, the Commonwealth’s flagship public research university, is one of the nation’s top universities for research as measured by national and international rankings, academic citations, and research funding. The campus spends more than $200 million on research each year, demonstrating its contribution to the nation’s position as a technological and economic leader. The University has consistently been named a top producer of Fulbright award winners. Additionally, UMass Amherst engages the community with 359 programs, partnering with 499 organizations in 21 states and involving 86 different campus units. Other notable accomplishments include recognition as a leader in social justice and being one of the first campuses to announce a policy to divest investments in South Africa. UMass Amherst is ranked among the top 10 research universities nationwide for its commitment to leadership in sustainability. The University is also distinguished by its W. E. B. Du Bois Department of Afro-American Studies; the Stonewall Center, one of the longest established centers supporting the LGBTQIA community (over 40 years); the Center for Women and Community, supporting victims of violence; and the Office of Disability Services, supporting students with disabilities in maximizing the quality of their university experience. 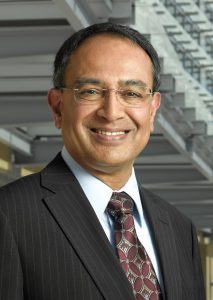 Kumble R. Subbaswamy became the 30th leader of UMass Amherst on July 1, 2012. He has emerged as a popular and well-regarded chancellor for his pursuit of academic excellence, promotion of research and outreach, and initiatives addressing campus climate, diversity, and culture.

Subbaswamy has overseen the opening of new cutting-edge academic and athletic facilities, including Commonwealth Honors College Residential Community, the Integrative Learning Center, the Life Science Laboratories, and the Football Performance Center. He has made sustainability a campus priority and focuses on strengthening community relationships, supporting area communities, and increasing access to the University’s rich academic and research resources.

Championing an open and transparent leadership style, Subbaswamy enacted a comprehensive campus-wide strategic planning process to continue to build on the successes of UMass Amherst in the coming years. As part of fortifying the future, Subbaswamy has played a key role in UMass Rising, a $300 million fundraising campaign, and the most significant in campus history.

Subbaswamy has instituted plans to improve the UMass Amherst educational experience by introducing more opportunities for undergraduate research experiences and integrative and team-based learning and to increase enrollment of students from diverse backgrounds.

In other administrative positions, Subbaswamy was dean of the college of arts and sciences at the University of Miami from 1997 to 2000. Then he left to become dean of arts and sciences at Indiana University Bloomington, serving until 2006, when he moved to Kentucky. He holds a Bachelor of Science from Bangalore University, a Master of Physics from Delhi University, and a PhD in physics from Indiana University. He was elected a fellow of the American Physical Society in 1989. His primary research area is the optical properties of novel materials and nonlinear excitations. He has published more than 60 articles and co-authored a book on the local density theory of polarizability.

Review of applications will begin February 4, 2022, and continue until the position is filled. To apply for this position please click on the Apply button, complete the brief application process, and upload your resume and position-specific cover letter. Nominations for this position may be emailed to Anne-Marie Kenney at amk@spelmanjohnson.com.  Applicants needing reasonable accommodation to participate in the application process should contact Spelman Johnson at 413-529-2895.

The University of Massachusetts Amherst is an Affirmative Action/ Equal Opportunity Employer of women, minorities, protected veterans, individuals with disabilities, and other protected group members.